Earlier this month an EdgeRater user pointed me to the Stocks and Commodities Magazine article titled “System Trading Made Easy with John Bollinger”, with a view to adding new indicators into the EdgeRater program based on the formulas contained in the article.

The article explains how to use %B, Bandwidth and BBTrend (one of the new indicators) to detect the “Three Pushes To A High” pattern that often indicates the end of a long top formation.

Example of Three Pushes to a High in BABA

This blog post shows how to use the new “Three Pushes To A High” template in EdgeRater to detect the pattern across all stocks in your chosen symbol list. The report produced by the template shows:

This month’s update to EdgeRater includes the template “Three Pushes to a High using Bollinger Bands” as well as a new set of indicators:

You can take a free 30 day trial of EdgeRater which includes access to this template and indicator set:

In order to completely understand this blog post and the template it is recommended that you read the referenced article.

How to find the Article

If you are a subscriber to Stocks and Commodities magazine you will be able to view the article online in the complete digital archive at traders.com

If you are not a subscriber to Stocks and Commodities magazine you can get a subscription here:

Or you can purchase the individual article here.

In the article, John Bollinger also mentions my good friend and market analyst Ian Woodward, saying “I think that in the fullness of time he’ll be known as one of the great analysts”. I have worked very closely with Ian on a set of templates which exist under the HGSI category in EdgeRater. Take a look at those templates to get a good overview of current market health.

Who is John Bollinger?

If you’ve been trading for even a short amount of time you will no doubt have heard of the indicators: “Bollinger Bands”, Bandwidth and “%B”. These were developed by John Bollinger in the 1980s. Most every charting application contains those indicators. Bollinger Bands are normally overlayed on the price chart and Bandwidth and %B are displayed in separate chart areas above or below the main chart:

What are Bollinger Bands?

What are Bandwidth and %B?

Bandwidth is simply the distance between the upper and lower bands, it is normalized by dividing by the middle band.

In the referenced article, Bollinger describes formulas for new indicators that are based on Bollinger Bands. Some of these indicators are things we have been using for a long time but under different names. For instance, Ian Woodward uses %B 1 day change as an indicator and has developed the ‘Kahuna’ to show when significant changes occur. One of Bollinger’s new indicators is called BB Impulse but it’s the same as %B 1-day change.

Bollinger’s goal was to develop a suite of indicators based on Bollinger Bands that give indications of different types of movement: Price Action, Volatility and Trend.

Three Pushes to a High

The Stocks and Commodities magazine article discusses the pattern ‘Three pushes to a high’ as an example to explain how these new indicators can be used. 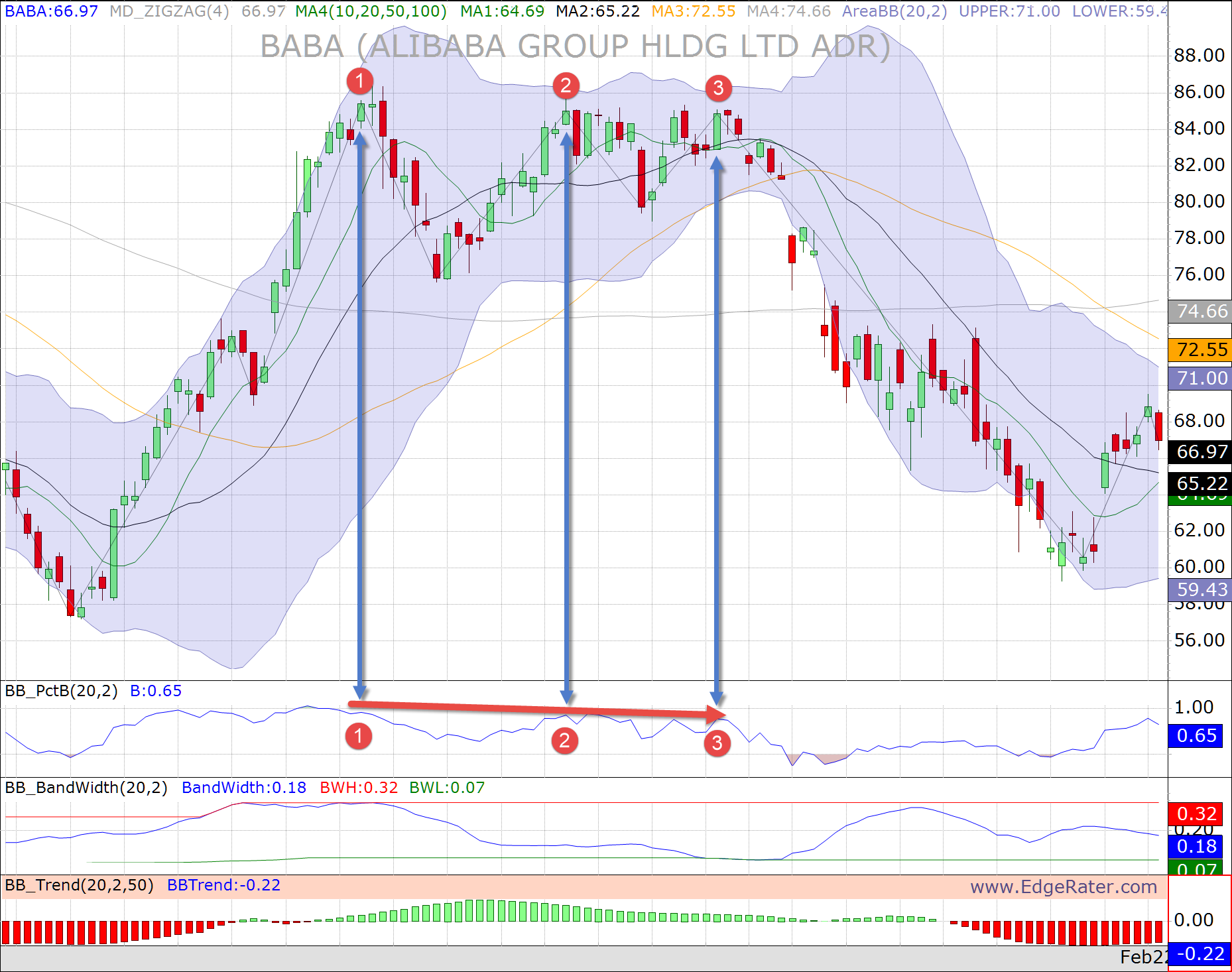 This example shows the 3 pushes to a high pattern, where peaks in price have occurred at points 1, 2 and 3. The article suggests that it is good to look for 3 similarly priced peaks that occur on declining %B values.

The article was written in 2012 and after researching around the internet a little I found that that John has refined the indicator conditions that help to identify the pattern. See the following video link to hear John talk about the pattern and how it can be detected with the new indicators:

My goal for this month in addition to coding up the formulas for the new indicators for EdgeRater was to go that one step further and produce an EdgeRater template that will detect the pattern on any list of stocks that you choose to use.

The Conditions for 3 Pushes to a high

According to the video mentioned above the conditions can be loosely described as follows:

I say loosely described because not every occurrence follows this exact set of criteria. However, the goal of the template is to alert you to the possibility of the pattern. The criteria that appear to be absolutely required are that there are 3 peaks in the stock price and at each peak %B is decreasing. So, the template has been designed so that the stocks meeting this ‘base rule’ are highlighted, allowing you to quickly review each chart to check on the other indicators.

Here’s a view of the report generated by the template:

All Criteria Met: Contains ‘Yes’ if there are 3 similarly priced peaks in the stock and at each peak %B is lower. This is the main column to look at. The idea is to sort by this column to bring all ‘Yes’ values to the top of the list and then take a look at each chart (by double clicking on the symbol row) to see if the other indicators make sense for the pattern. The report is linked to a chart layout which allows verification of the pattern using the indicators %B, Bandwidth and BB_Trend. Use the video that is linked from this blog post to hear John Bollinger discuss what he looks for in terms of the other indicators. Note that the other indicators are not part of the scan because those criteria appear to be more subjective in nature.

3 Similar Peaks: Contains ‘Yes’ if the most recent 3 peaks in the stock price have occurred at similar price levels. This is actually calculated based on the standard deviation of all 3 peaks. To find the peaks that have the least amount of deviation between them, click on the Peak % Dev column and sort by lowest number first.

3 %B Lower: Contains ‘Yes’ if %B has been lower at the three most recent peaks in price.

Bars Since Peak: Shows the number of bars since the last peak was seen. A value of 2 indicates that the peak was seen yesterday. Note that this value can never be 1 because in order for a peak to be detected, price must have started moving away from a previous higher level. As time move on, the last peak detected can disappear if price actually reverses and goes higher without forming a trough.

Count Avgs Above: Shows how many out of the 3 listed moving averages that price is above. This is simply the count of ‘Yes’ values in the 3 columns Above MA50, Above MA20, Above MA10. The idea here is that this can be a way to detect if price is rising (which is one of the criteria for the pattern). Although note that price can still be rising even if it is below any of these moving averages.

Trough Since Peak: Contains a ‘Yes’ if a trough has been seen since the last peak.

Peak % Dev: Shows the standard deviation in percentage terms between the last 3 peaks seen. You can sort by this column to show smallest numbers first which should show peaks that are closer together in terms of price.

Above MA50, MA20, MA10: Contains a ‘Yes’ if price is above the moving average. Use these columns as a guide to whether the stock price is rising. Note that price can be below any of these averages even if the price is rising. It is always best to look at the chart for confirmation here.

Double-Clicking in any of the report cells (or scrolling around the report cells with your keyboard arrow keys) will bring up a chart with a layout that has been specifically designed for this template: 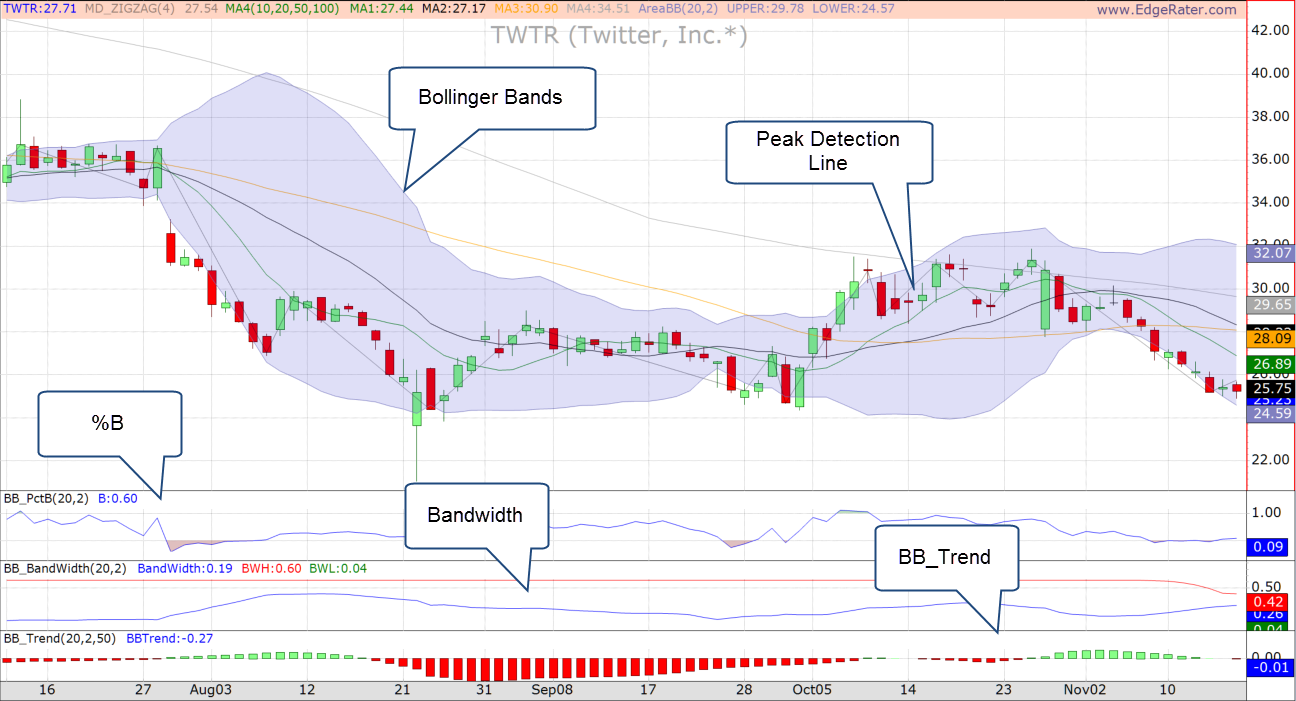 How To Use The Template

The template is able to quickly generate a report across all stocks in your chosen symbol list that will alert you to a possible “Three Pushes to a High” pattern.

The recommended way to use the template is:

The Stocks and Commodities magazine article “System Trading Made Easy With John Bollinger” introduced a new set of indicators and discussed how to use them to detect the “Three Pushes to a high” pattern that is often associated with long topping formations. The February 2016 template in EdgeRater allows you to easily find the stocks that are showing that pattern. In addition to the template, EdgeRater now contains the new set of indicators that were discussed in the magazine article.