A Trading Edge with Hot and Cold Ranking

I was recently contacted by an EdgeRater user with a request to investigate a trading technique that he had heard about, the goal being to see if it really was successful. The idea is simple enough and at the heart of it is based on short term pullbacks within longer term uptrends (although it uses an interesting way to find the stocks to trade). In this post I will present my findings and show how you can test the idea yourself in EdgeRater. The December 2015 template release in EdgeRater is a template that simplifies the process of locating stocks to trade using this technique.

The trading rules for this method are fairly simple:

You can see that the essence of the technique is to pick stocks that have had good longer-term performance (Hot Rank) but have experienced sharp pullbacks in the shorter term (Cold Rank) and to maintain a portfolio of the top 10 of these, rotating on the 7th trading day of each month.

Let’s go through an example using the Nasdaq 100 for the month of October 2015.

The 6th trading day of October 2015 was October 8th. So, on October 8th after the market closed here is the spreadsheet that would have been produced:

The following columns show the values that are used to calculate the combo rank:

Hot Rank: The ranking of Hot% among all stocks in the chosen symbol list (Nasdaq 100).

Cold Rank: The reverse ranking of Cold% among all stocks in the Nasdaq 100.

Combo Rank: Is the rank of the Combo Value. Best rank is rank 1.

Using this spreadsheet, the top 10 ranked stocks are the ones to purchase on the 7th trading day of the month, the are: BRCM, EA, AMZN, TSLA, ORLY, ADBE, ATVI, FB, EBAY and SBUX.

The following month on the 6th trading day in November the report would have been produced as follows:

The only 3 stocks to remain in the top 10 from the previous month were: ATVI, ORLY and SBUX so these are kept in the portfolio

And the following 7 new stocks are then purchased on the 7th trading day:

How did this perform over the last 2 years?

I used EdgeRater to test this strategy using the Nasdaq 100, going back to January 2014. The settings (in case you want to try it for yourself) are as follows:

Set up your Entries and Exits tab as follows: 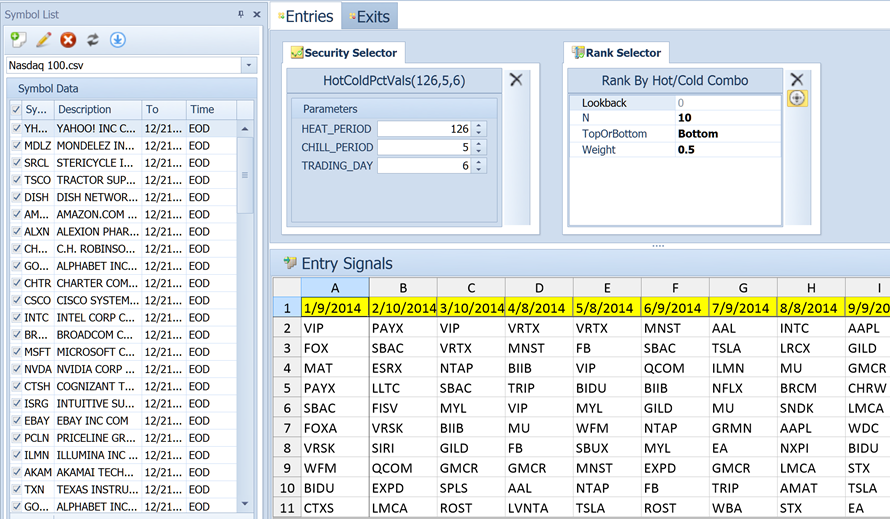 The Security Selector is set to the “HotColdPctVals” script from the system indicators script library. This script is responsible for calculating the Hot% and Cold% values and also for generating an ‘Event’ on the specified trading day of the month.

The Rank selector is set to the “Rank by Hot/Cold Combo” rank selector from the managed code part of the script library. This selector is responsible for ranking the individual Hot and Cold % values and combining them using a specified weighting factor as described in the formula at the top of this post.

When this set of selectors is run against the Nasdaq 100 list it produces the grid shown above with a column for each 6th trading day of the year. These are the stocks that should be purchased each month.

Set up the Trade Simulation tab as follows: 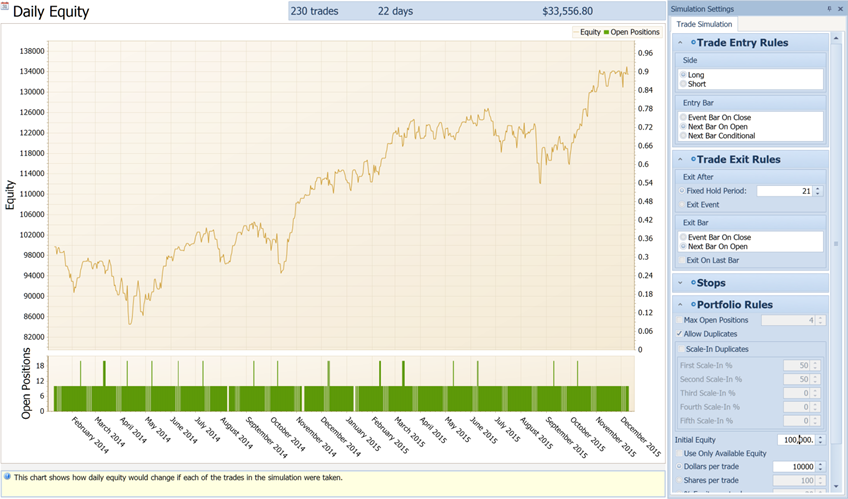 The settings are set so that a long side trade is taken on the open of the next bar after the stock appears in the Entries list. The stocks are held for 21 bars (roughly 1 trading month) and then sold. This simulates the process of adjusting the portfolio so that it contains only the top 10 stocks from each month’s list.

As you can see in the above chart the account ended up 33% higher over a 2-year period. 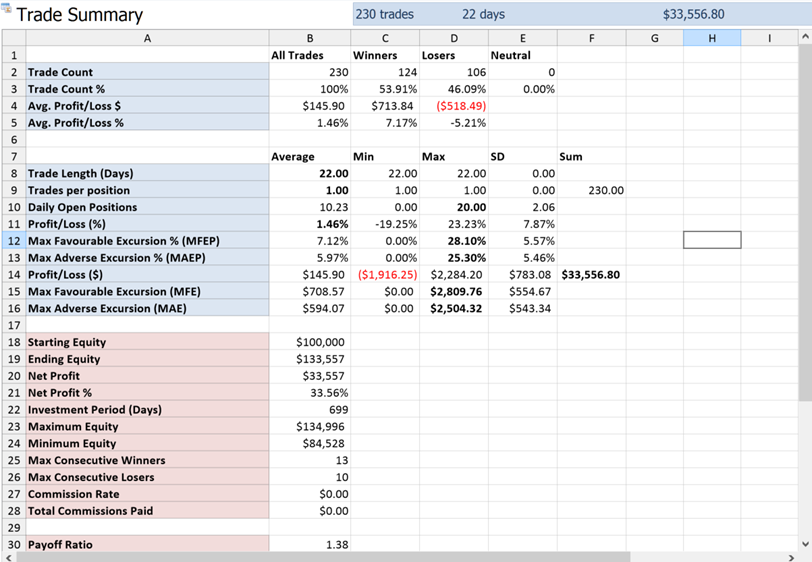 Using the new template to find the trades

The December 2015 template is a one that can be run against any symbol list and will rank the stocks according to the formula at the top of this post.

The template is called “Hot and Cold % Combo Ranking” and can be found in the “Hot Topics” Category. 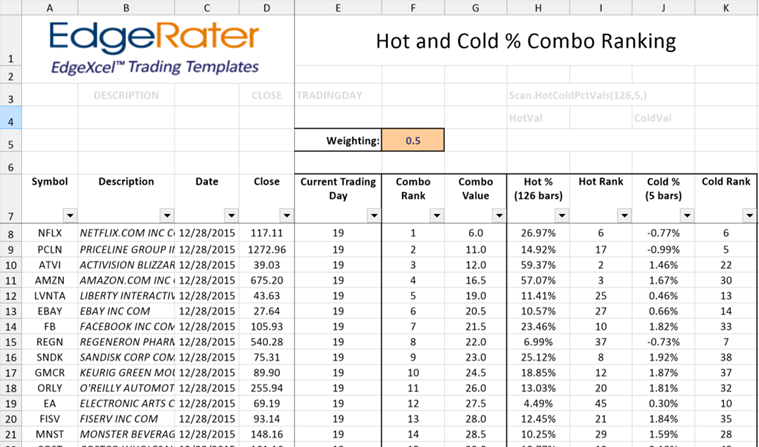 If this is run on the 6th Trading day of the month then the 10 stocks at the top of the list (with Combo Ranks 1-10) would be the ones to buy on the open of the following trading day if you were following this method.