Working with Entry and Exit Signals

One of the fundamental concepts in EdgeRater is the ability to run a scan across multiple dates, generating a signal for each stock that meets the scan criteria for every day in the chosen time period. Here’s a look at the output of the scan when running the AUBB (Cross above upper Bollinger Band) script against a list of stocks that have weekly options:

The signals can be viewed either as a grid or a list, this option is set using the menu option: Edge Design->View->Grid/List

This option is a toggle button which switches between the two view types. If a grid view is currently showing and the button is toggled, a list view will be shown and vice versa. Here’s the same view as above but with the List view option: 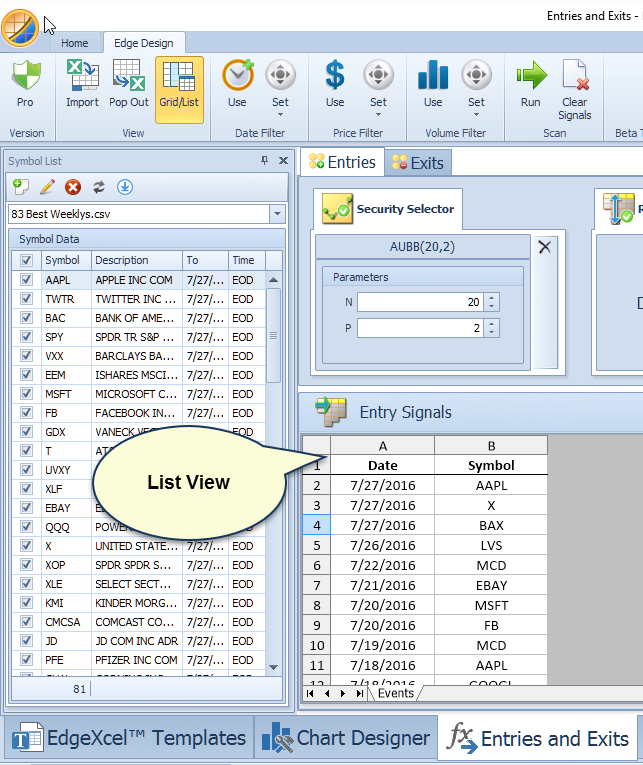 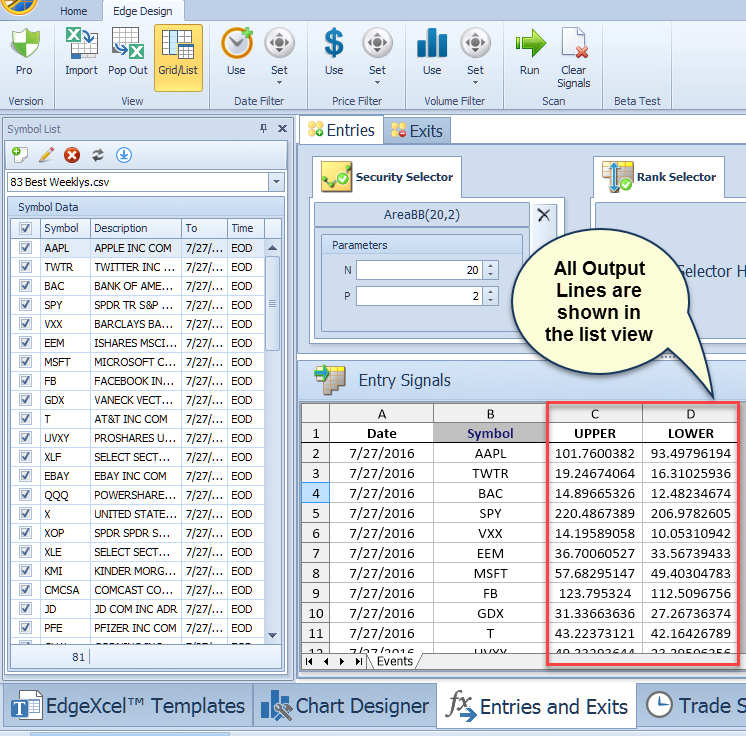 So, if you want to get a report of all indicator values for every stock over a date range, use the list view.

It’s easy to save the grid or list view as an Excel .xlsx file. Just use the menu option: Edge Design->View->Pop Out

This will open a standalone editable spreadsheet in EdgeRater which has the File->Save capability. The file is then stored in your chosen location on your hard drive and can be opened in Microsoft Excel.

One of the new features of EdgeRater is the ability to import signals from an Excel .xlsx file. There are four possible file layouts accepted.

The import file must be in Excel .xlsx format with a column header row as the first row. The name of each column determines what gets imported:

If the import file contains columns named ‘Date’ and ‘Symbol’

A date/symbol combination will be loaded into the active signals area for every date in the import file combined with every checked symbol in the current symbol list.

*Note that a shorthand name for the ‘Symbol’ column is ‘Sym.’ which can be used instead and is used in the Trade Simulation trade list column names. 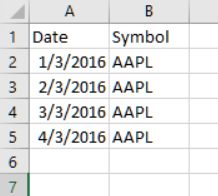 Now, using the import function in EdgeRater when the Entries tab is selected (menu option: Edge Design->View->Import), the following signals are shown when viewed as a grid

Suppose you had a file containing only a Date column (perhaps containing significant historical trading dates) and you wanted to generate entry signals for your entire list of symbols for each date in the file. Here’s what that would look like. First the import file would look like this: 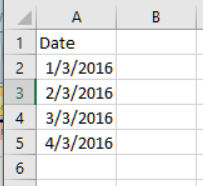 Now the import function generates a signal for every checked symbol in your active symbol list for each date in the import file: 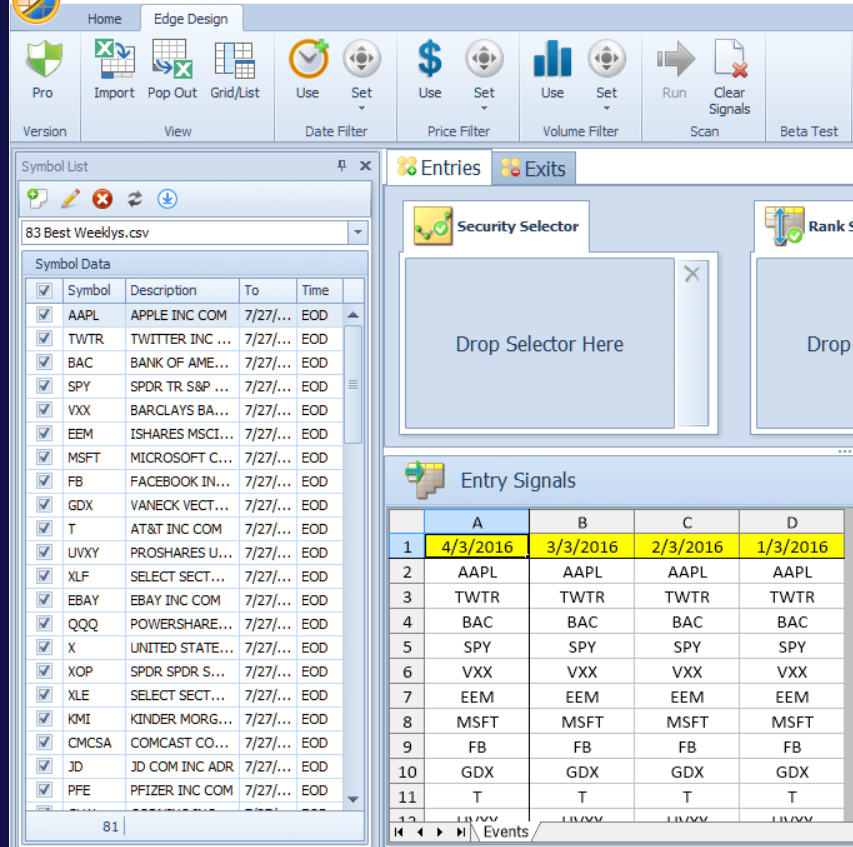 What can you do with these signals?

View the signal on a chart

Looking at the signals on a chart is one of the basic things you can do with this list. To do so, just double click on a signal and it will be highlighted on a chart. Selecting different signals with the mouse or keyboard shows the exact point on each chart where the signal occurred. The signal is annotated with the ‘Edge Event’ annotation:

The Trade Simulation tab allows you to take the set of entry signals and run them through a simulation. You can choose how you want to use the signals in the simulation, such as ‘Enter at Close’ or ‘Enter next Open’. You can also choose when the trades should be exited, either after a fixed hold period or after an exit signal is generated. Exit signals can be generated in a similar manner as entry signals – by dropping a scanning script onto the Exits side of the Entries and Exits tab or by manually importing a file containing the signals. After running a trade simulation, a detailed report is generated showing a trade list of all the trades taken (clickable so that you can view the annotated trades on a chart), A P&L Distribution graph, a Daily Equity Chart and a Statistical Summary: 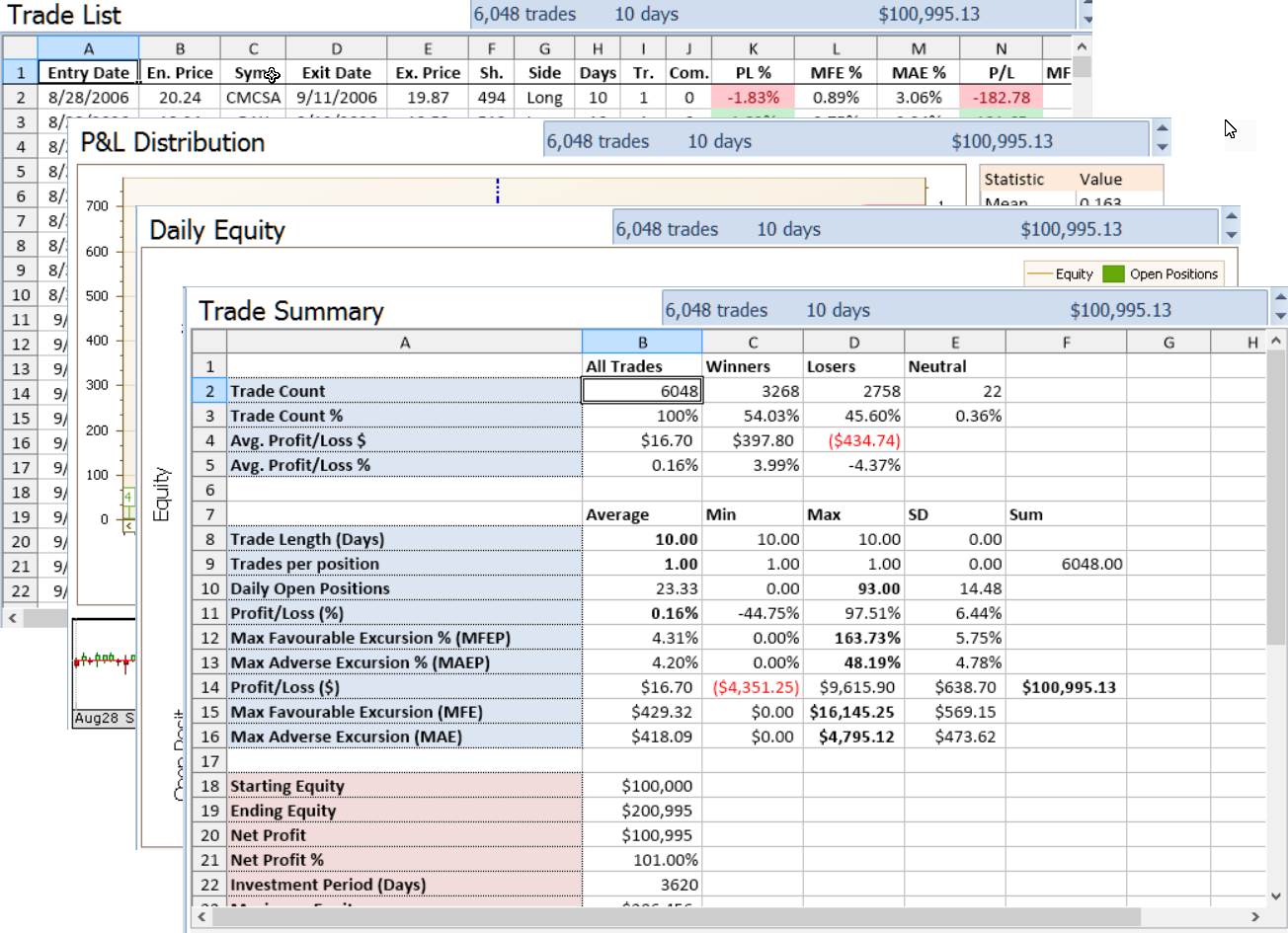 Once you have generated the trade simulation report, you can use the pop-out function to view in a separate spreadsheet viewer which allows saving the report in Excel .xlsx format. The Entries and Exits tab recognizes the trade list in a trade simulation report file and will import it using the above rules for import. Notice that the Trade List contains the columns Entry Date, Exit Date, and Sym. So, if this trade simulation report is imported back into the entries and exits tab, the exact set of entry and exit signals will be populated in tab. This can be useful if you want to keep a fixed list of dates and symbols to use for backtesting and avoid re-generating signals from scratch.

The Entries and Exits tab contains signals that can be used by the trade simulation tab to generate a trade simulation report. Signals are generated by either running a scan or by manually importing a saved list of signals. Signals in the Entries and Exits tab can be viewed as a grid (where each column contains symbols that have signals on the column date) or as a list (where each row contains one signal and the date and symbol is specified in the row). The ability to import a set of signals from a file system adds great flexibility and allows you to test signals from other data sources or system templates.