The book ‘Buy The Fear Sell The Greed’ by Larry Connors contains 7 behavioral quant strategies for traders. This post reviews the first strategy in the book named ‘RSI PowerZones’ and shows how to view strategy signals and how to backtest along with backtest results.

The rules for the strategy are simple:

The book has tested the following threshold levels:

Testing the strategy with EdgeRater 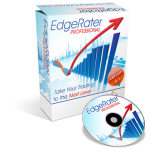 I designed EdgeRater to make it easy to test strategies like this. The remainder of this post will show some of the trade examples, how to view strategy signals for any symbol (not just SPY) and how to backtest using the built in script. All examples are using the (25,20,55) version of the strategy.

This chart shows the 5 most recent trades that occurred in 2018. This is also the period where SPY dropped into bear market territory with an 11% decline in the early part of the year. 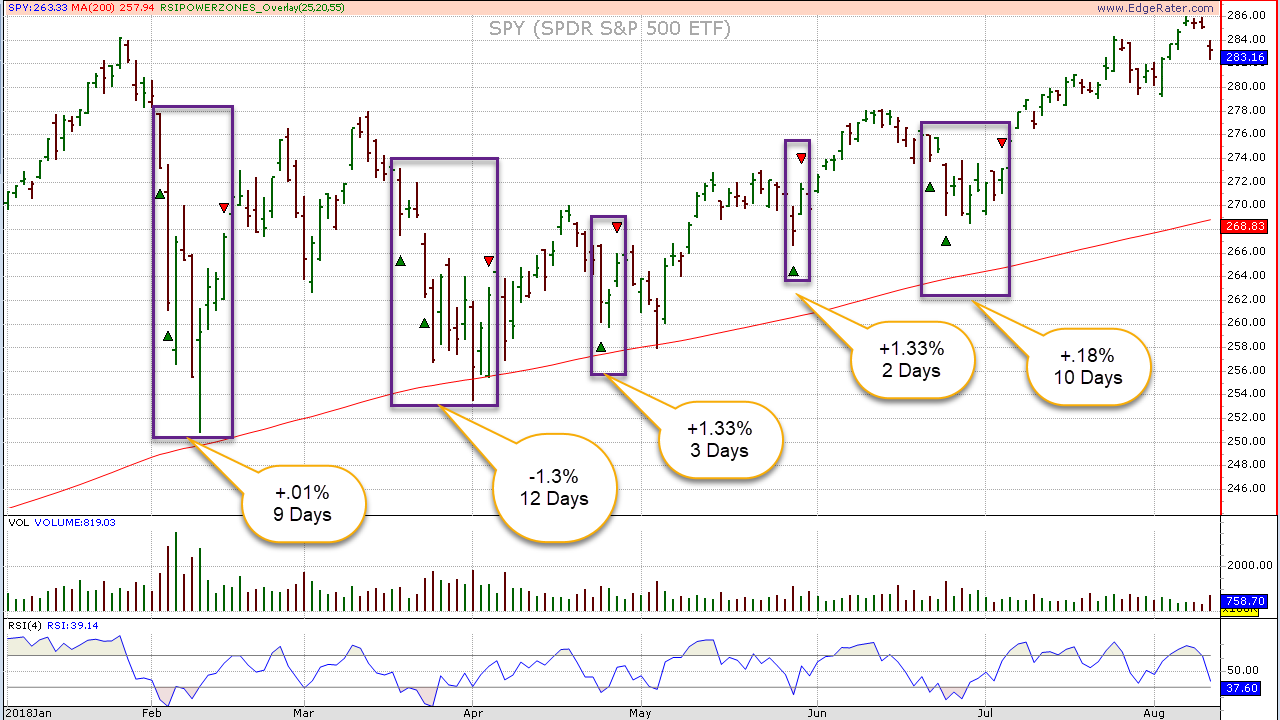 This market period was challenging for traders and 1 of the 5 trades was a losing trade, 2 trades barely broke even and 2 trades had just about the average trade return for all trades since 1993. 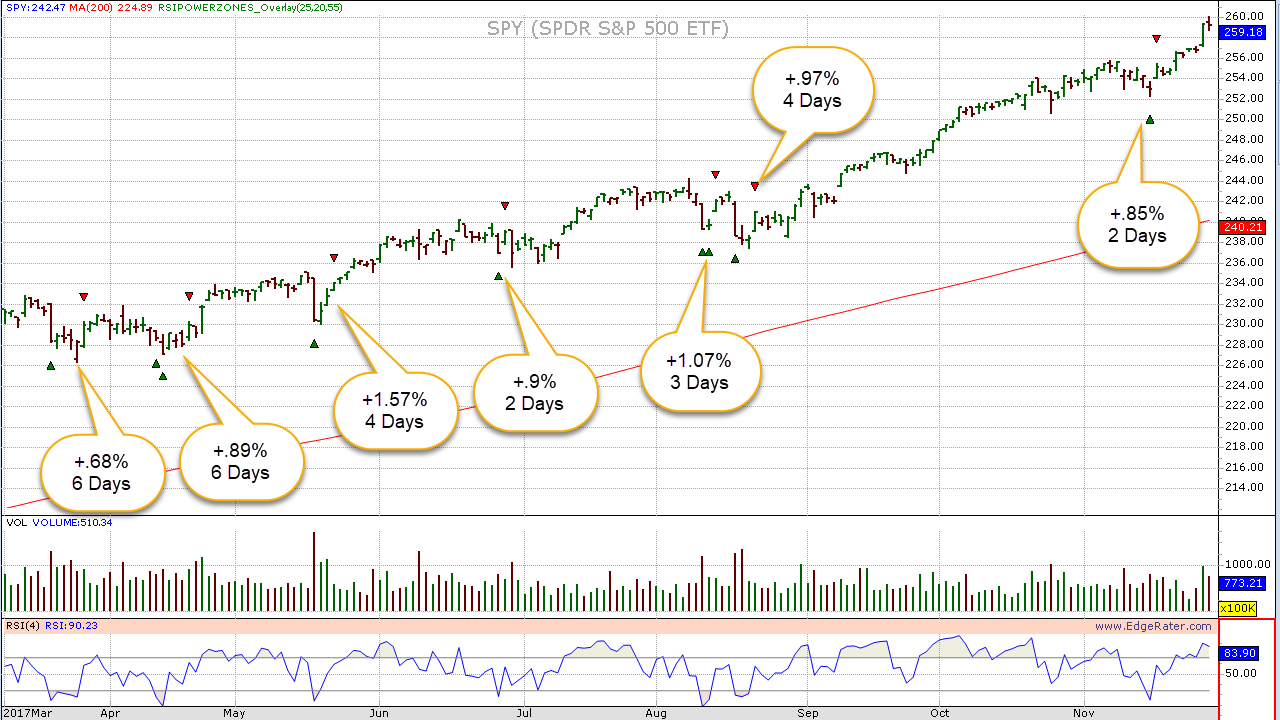 You can see there were 7 trades during this rising market period, all of which were profitable.

The EdgeRater August 2018 update includes a simulation script named ‘SIM_RSIPOWERZONES‘ which can be found in the script library: 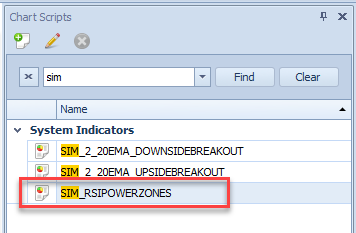 The Entries and Exits tab is where backtesting starts. The idea is to generate a series of entry and exit events which will then be used within the trade simulation tab where you can define portfolio rules such as allowing duplicates and dollars per trade.

The script SIM_RSIPOWERZONES is a special edgerater script in that it generates both entry and exit signals rather than using two separate scripts, one for entry and one for exit. To use it just double-click it to add it to the Entries selector area:

Next head over to the Trade Simulation tab and for this particular simulation choose the following settings:

Then press Run to run the simulation with the current contents of the Entries and Exits tab (which contains entry and exit signals due to the previous step). 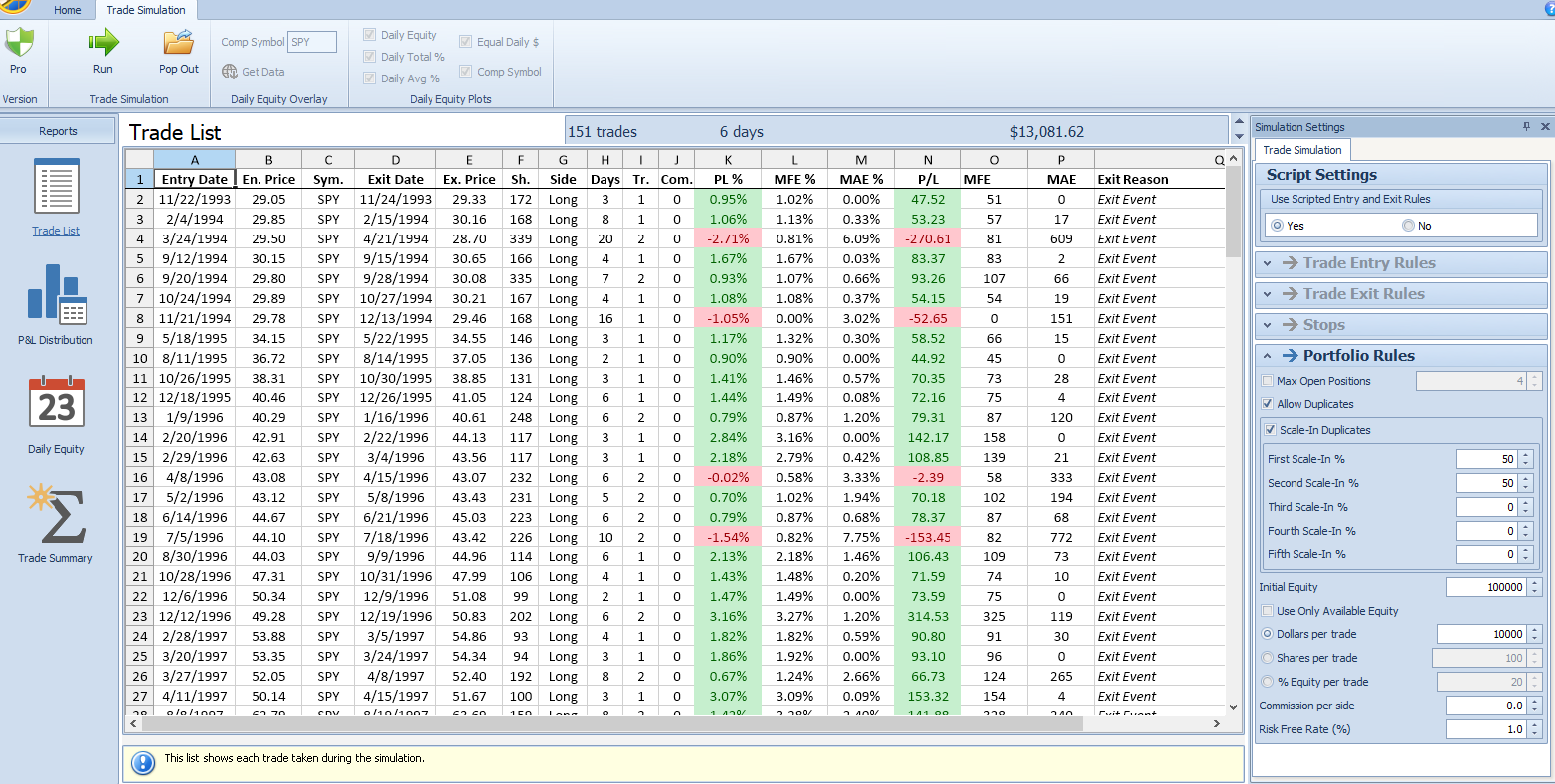 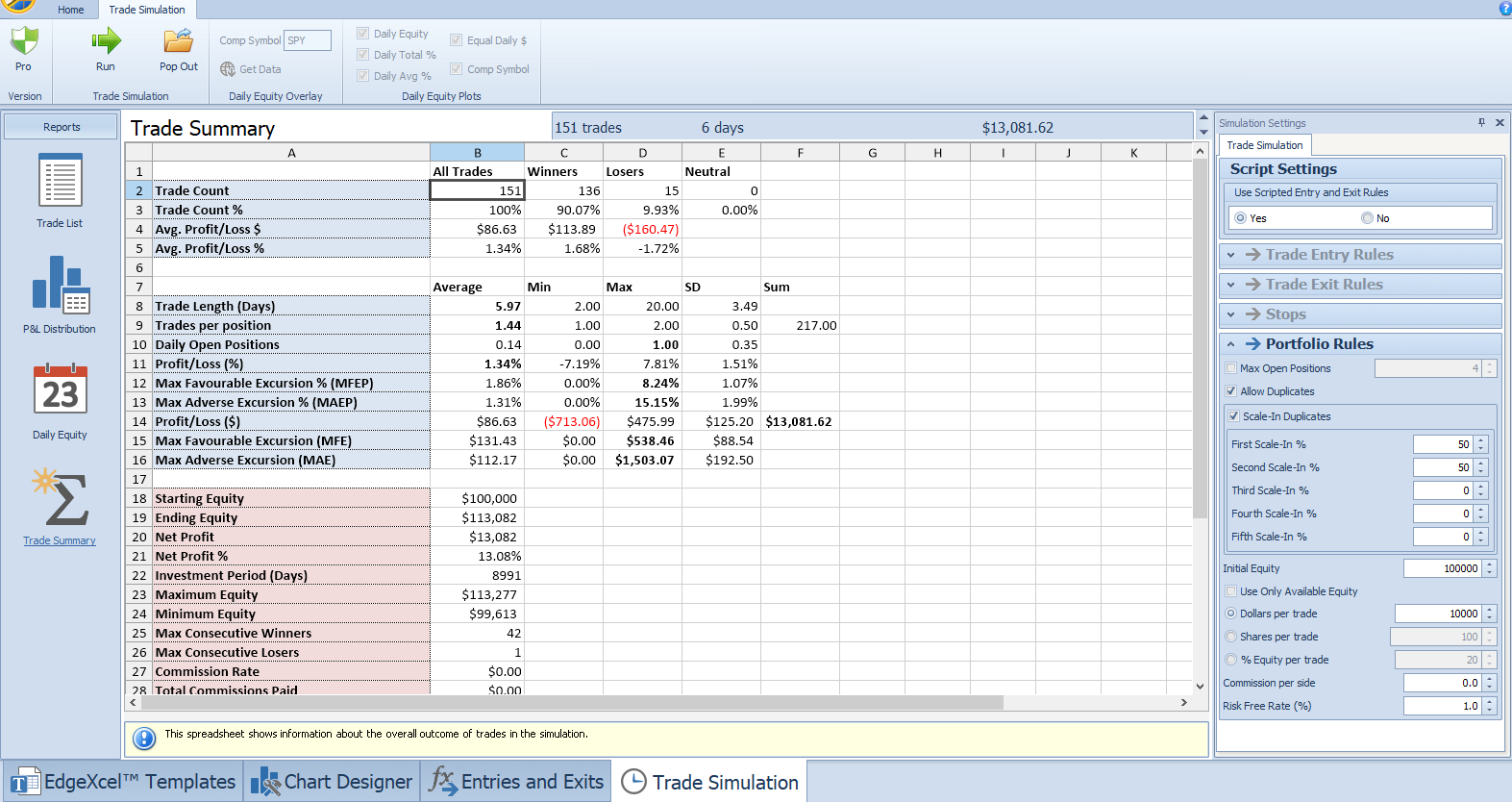 Using the SIM_RSIPOWERZONES script and SPY data going back to 1993, the strategy shows 136 winners and 15 losers for a 90% win rate with an average P/L per trade of 1.34% and and average hold period of 6 days.

Of course you can test this same script on any symbol in your list or even multiple symbols at once.

The August 2018 update of EdgeRater includes the new RSI PowerZones template which allows you to monitor all signals generated by this strategy on a daily basis for all symbols in your selected symbol list.

Every time you run this template you will be notified of any new action such as:

In addition the template will keep you informed of the current performance of every open trade. Here’s an example of the template report generated using a list of liquid ETFs. 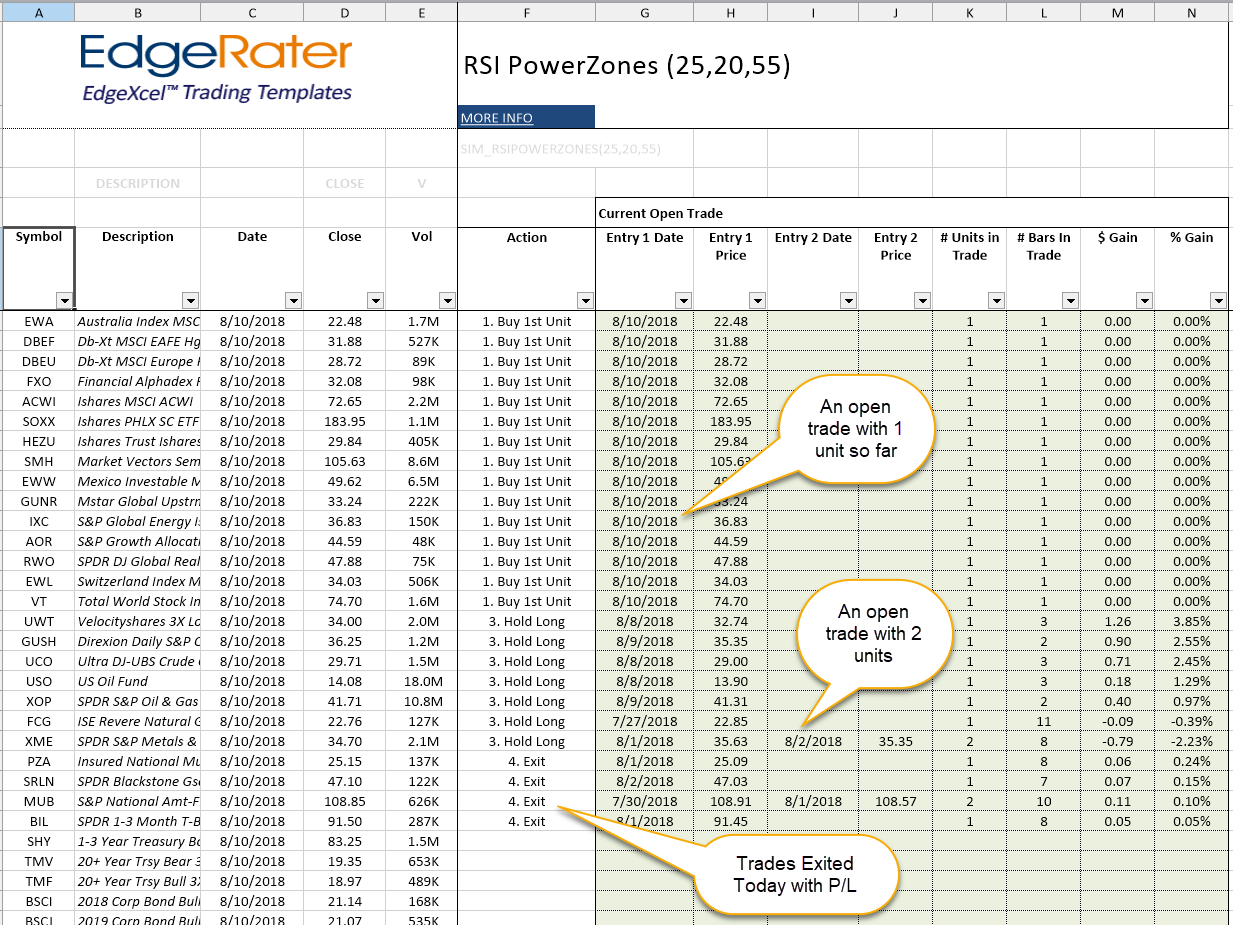 The RSI PowerZones strategy from the book Buy The Fear Sell The Greed by Larry Connors has produced 90% winning trades in SPY since inception (1993). Using the SIM_RSIPOWERZONES script in EdgeRater it is possible to easily backtest and verify these results and also to test on other symbols. You can also use the new RSI PowerZones template to monitor all daily buy/sell/hold actions occuring in your chosen symbols and to keep track of current open positions.

This is all available in the permanent license edition of EdgeRater (called EdgeRater PRO Unleashed) and the subscription version called EdgeClub.